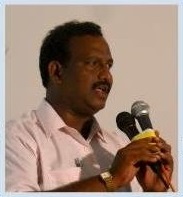 Prabhu grew up in a “show biz” household.  His father was a writer, actor, producer and director.  Prabhu, himself, acted in his younger years in many stage productions with a group of sixteen amateur actors called Actor Institute.  He continues his association with them and personally knows professional film directors, producers, and actors on both the East Coast (India’s New York) and West Coast (India’s Hollywood) in what the rest of the entertainment world calls Bollywood.

He first joined us a year ago as a member of our International Advisory Board.  His plans include locating a producer, creating tourism to our film site in Arizona, and contracting with major television networks around the world “for this prestigious project for the blessings of the total mankind.”

When he read the pilot script, he said, “Just now I am reading the script. Surely I will contact TV producers in India.  Someone in my actors’ circle is saying they will invest some money.  Oh, marvelous work you have done, Madam.  You have already done great hard work for years together.  It must not be in vain.  God is here.  He will open seven doors if one shuts. ”

“After the pilot, you can start shooting other episodes and automatically this will conquer the hearts of all the worldly people also.  Then…sponsors from all countries.”

Prabhu with four of his friends in the film industry meeting in Mumbai.  Prabhu is in the middle.  The man second from left is looking over my Series “Bible” in the .picture below.